Studio Silverback launches “Seat At The Table” on YouTube today!

Studio Silverback is very proud to launch their new series Seat At The Table, a YouTube Originals:

The series starts October 25th 2021, releasing 1 episode a day until we get to COP26 where the last 2 episodes will be filmed, edited and released from COP itself. 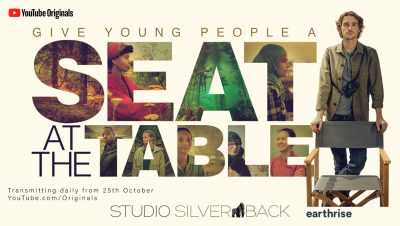 Series Title: SEAT AT THE TABLE

Seat at the Table joins YouTube creator Jack Harries as he paints a truly global picture of the climate emergency. This stunningly shot 11-part series sees Jack travel from the southern tip of the UK to the UN climate conference in Scotland (COP26) whilst reaching out to collaborators across the world who though on the front lines of climate change often don’t have their voices heard.

Along his journey Jack will speak with creators, communities, campaigners and inventors spanning multiple continents to unfold the human stories of climate change. Gathering powerful on camera testimonies Jack arrives at COP26 with a striking film of the stories of young people around the planet that he aims to show to world leaders

The series is made by the multi award-winning Studio Silverback, producers of Prince William’s “The Earthshot Prize” and co-producers with Silverback Films of “David Attenborough A Life on Our Planet”.