Sir David Attenborough presents “Our Planet” in the USA 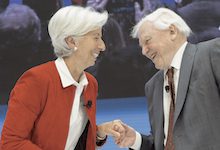 April was a busy month for the “Our Planet” team after the world wide release of the Netflix series on April 5th 2019.

“Our Planet” premiered at the iconic Smithsonian Museum of Natural History. A wide range of Senators, Members of Congress, NGO’s, Scientists and the press attended this event, which was followed by a Q&A with Alastair Fothergill and Sir David Attenborough.

Christine Lagarde, the IMF Managing Director invited Sir David Attenborough to speak at the IMF-World Bank Spring Meetings, in front of an audience of Finance Ministers, Governors of Central Banks and Executive Directors. After a presentation of “Our Planet”, Lagarde introduced Attenborough as “The Voice, you are The Voice!” she went on to say “You have an extraordinary career spanning 70 years, bringing the beauty of nature to populations, and you could happily retire but you now want to explain to us what peril we are in if nothing is done, and you believe that we have very little time to do that.”

We are in the process of a new fresh extinction. We are in terrible trouble, and the longer we wait to do something about it, the worst it will get, so the urgency could not be exaggerated.”

DA: “Financial systems, which of course I don’t understand, and you do, have a lot in common with the natural world systems. Both are economies. If you deal with your capital – as far as I understand these things – it’s fine if you can take the profit, but you wouldn’t be so silly as to eat into the capital, would you? But that is what we are doing with the natural world all the time, and doing so in the seas for example”. (He mentioned the Herring fished to extinction on the 18th century in the North sea, and the collapse of the Atlantic Cod population on the banks of Newfoundland last century).

Nature Is Our Capital: “We have to treat the Natural World in the way in which you deal with economies. We musn’t eat into capital, we can only take profit.”

Chief Executive of the World Bank Kristalina Georgieva invited Sir David to an “Our Planet” presentation and thanked him by twitter:

“It was a pleasure today to talk to Sir David Attenborough—His message is clear: Healthy oceans are critical for food, jobs and economic growth; but if we don’t act now, we can loose this Natural Capital forever.”

“Refuse, Reuse, Recycle, Rethink & Regulate”—This should be our mantra to beat plastic pollution and save the oceans for future generations. Thank you Sir David Attenborough for inspiring us and sharing your wisdom!