Keith Scholey is currently a Director of Silverback Films Ltd. In 2019 he series produced Netflix’s ‘Our Planet’, and in 2020 is an Executive Producer for the  BBC One series ‘A Perfect Planet’ and Director of the cinema films ‘David Attenborough: A Life on Our Planet’ and Disneynature’s ‘Dolphin Reef’.

Recent credits as an independent executive producer include the Discovery Channel series ‘Wild Planet; North America’ and ‘Deadly Islands’ and also the producer and director of the Disneynature cinema films ‘African Cats’ and ‘Bears’.

Born and raised in East Africa, he qualified as a Zoologist with both a degree and PhD from Bristol University.  In 1982 he worked as a wildlife stills photographer, a passion he continued throughout his television career.  He also began working with the BBC Natural History Unit as a Researcher and subsequently became a producer making many films for the Natural World and Wildlife on One series as well as for special series including David Attenborough’s award winning ‘The Private Life of Plants’. In 1993 he became Editor of Wildlife on One and creating series such as the Wildlife Specials and Big Cat Diary.

In 1998 he was appointed the Head of the Natural History Unit and as Editor in Chief oversaw series including David Attenborough’s Life of Birds and The Life of Mammals, Blue Planet, Andes to Amazon, Cousins and Wild Africa.  In 2002 he was appointed Controller of Specialist Factual, responsible for BBC Natural History, Science, History, Arts, Business and Religious in house productions. Natural History productions made during this time included Springwatch, David Attenborough’s Life in the Undergrowth and Planet Earth.  Other  department major series included Seven Industrial Wonders, Egypt and Rome, and specials such as Pompei and Supervolcano.

In 2008 he left the BBC to pursue an independent career in natural history cinema and television production.

Awards for productions he has been responsible for include Emmies, Baftas, RTS’s, Wildscreen pandas and Jackson Hole Awards. He was awarded a Doctor of Science degree from the University of Bristol. 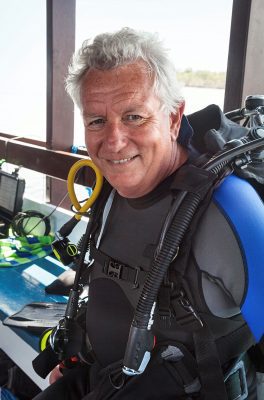